Brian has been dreaming about a muscle car since childhood and now he's finally got one of his own.

We met Brian at the Racine, WI stop of the 2009 Hot Rod Power Tour. We learned he has always been a fan of muscle cars and went on the Power Tour to figure out what kind of car he might like. Brian was impressed with our '67 Dodge Dart resto-mod touring car and we talked for the next hour and a half! He asked if we could help find a car for him and to do the work.

We remained in contact with Brian throughout the summer and in the fall we came across a 1970 Chevrolet Malibu locally. We sent many photos to Brian and spent a lot of time talking with him about this car and what could be done with it now and in the future. The car at one point had some very poor body work done to it and a paint job to match! However, it had all the pieces and was a solid car.

Because the body work and paint was very ugly, it was decided to spray the car with flat black and paint gloss black "SS" stripes on it. Brian bought a set of era appropriate ralleye wheels with good rubber on Craig's list. The completed paint work gave the car an aggressive stealthy look.

Brain's comments about his experience with Fast Freddie's....
The entire process was a great experience from start to finish. A couple of components that were critical to me were communication and honesty because I live hundreds of miles away. Everything went very smoothly and the results exceeded my expectations. It all started with a phone call from Fred and he took it from there. He not only located the car but got her running again (after being in hibernation for 4 years) and performed a laundry list of things too extensive to list and prepared the car for a 13 plus hour drive home. On the drive home I was met by people at every gas stop that either gave me the thumbs up or wanted to talk with me about the car. The car handled perfectly all the way home and in fact I did not have to add a drop of any fluid (except for gas) and it drove straight down the highway with only one finger on the steering wheel.

In about a year I will be returning the car to Fred to do several modifications and will do so until the car is complete. I told Fred he has a client for life because of his honesty and doing everything he said he would.

Fred, I cannot thank you enough for turning my dream into reality and making the entire process and absolute blast. Keep up the great work! Brian 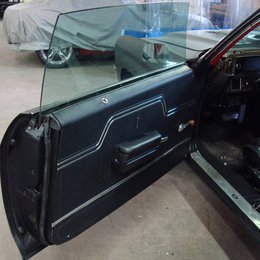